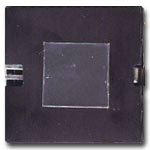 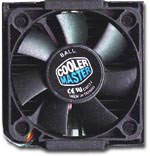 
If you were to look closely at the top of most Celeron processors you would see a piece of metal about 20 mm square. On one side of this piece of metal the silicon die is attached, and on the other, the heat sink. This metal plate on the processor allows heat from the core to be transfered to a heatsink, where the heat is disapated to the surrounding air by convection or fans. For that transfer of heat to occur, the two surfaces in question must make direct contact. If they don't, the heat from the processor can't flow to the heatsink, and the heatsink won't be doing its job. The heat that can move across this barrier is directly related to the amount surface area in direct contact. But when you look at your CPU, that surface area may not necessarily be what you think it is.

First we looked at the surface of the cpu-plate closely. What we saw were lots of small checks, scratches, and depressions - basic surface flaws. Combined together, all these minute flaws can be a significant barrier to how cool your processor runs. Each one of those little depressions can act like a very tiny air bubble when covered by your heatsink, even with thermal grease-though to a lesser extent. Air makes an excellent insulator (just think about those double-pain windows keeping your house warm in the winter), and in this case, will help to keep your processor running warmer .

Secondly, we looked at the flatness of the CPU-plate on our test chip, and the bases of several OEM heatsinks we have. We found that most of our heatsinks had good surface finishes (ie the bases were quite smooth in most cases), but were generally bowed out at the center. Of those we testesd, heat sinks which had their bases machined were very flat. Our Celeron, on the other hand was not absolutly flat! The corners were raised up by as much as 0.0024". Other Celeron's we tested were a bit better, but most had their edges slightly higher then their centers. That may not sound like much but picture what happens when you strap on a heatsink.

What does all this mean?

What does this mean to your system's performance? All those little flaws added together have a big effect on your computer - they decrease how much the processor comes in direct contact with the heat sink, and that means a higher running temp, slower clock speed if you overclock, and more cooling requirements.

Here's basically how the problem comes into play