Not only are there full size aluminum and copper fins in the construction of this heatsink, but between heat fin is a copper spacer 1mm thick. The copper base that these spacers form measures 10mm thick, and helps to ensure heat energy is transmitted laterally to the outer fins. 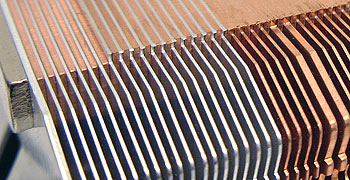 Two relatively small screws and some steel brackets hold the fins of this heatsink in place. Were the screws to loosen, the heatsink would come undone and the processor below would ultimately fail.