Continuing on in typical Zalman tradition, the CNPS7000A-Cu is a low noise heatsink that can be made even quieter with the use of the included Fanmate 1 fan speed controller. When used, the Fanmate 1 drops the speed of the integrated 85mm fan impeller from 2400RPM to about 1350RPM, making it barely audible.

The heatsink comes with mounting brackets for the AthlonXP (with holes in the motherboard), Pentium 4, and even Athlon64 processors. This means if you're thinking of upgrading from a Pentium4 to an Athlon64 processor you won't have to buy a whole new heatsink when you do. 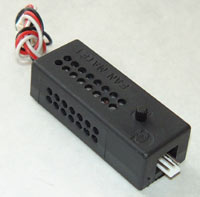 As the CNPS7000A-Cu is both a large and heavy heatsink, Zalman have developed a strong retention system for the 773gram heatsink. Spring clips are out, and in their place are two 7mm wide aluminum bars.

The two aluminum bars slide into the clip spaces in a standard Pentium 4 HSRM, after which the entire heatsink is dropped into the socket and screwed down in place. An integrated spring mechanism holds the heatsink down and applies the correct mounting pressure to the processor core.

With the Socket 754 system, two brass nipples screw into the standard metal support plate on every Athlon64 motherboard. The spring clip on the CNPS7000A-cu then firmly screws into the brass mounting posts. 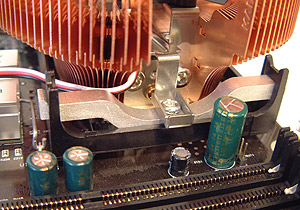 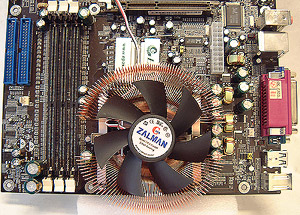 When the CNPS7000A-Cu is installed on a Pentium 4 motherboard it is easy to see why there may be space problems in some compact enclosures.