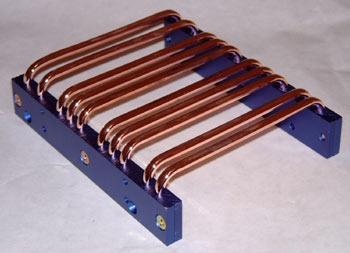 Any 3.5" hard drive, IDE or SCSI, can be mounted within the Zalman ZM-2HC1 frame which is comprised of a couple of aluminum sections, and (10) 5mm diameter copper heatpipes. The unit requires no fan to operate, weighs about 260 grams, and has a cooling surface area of approximately 400cm squared.

The flat aluminum bars screw directly onto the side of a 3.5" hard drive, where they sandwich in the ends of the ten heatpipes. The aluminum sections act as a heatsink for the hard drive, and transfer that heat to the copper heatpipes. 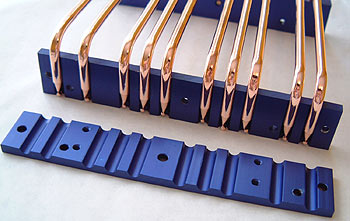 Each of the heatpipes stands about 7mm over the top of the hard drive, leaving plenty of space for airflow to pass through, usually to the tune of 3-4 degrees Celsius cooling without forced air. By adding in a low noise fan blowing in the direction of the ZM-2HC1 hard drive cooler, that temperature difference can further be increased.

To accommodate the larger dimensions of the Zalman ZM-2HC1 it is necessary to mount it in a 5.25" bay, or used the included mounting kit and drill some holes in the base of the case, mounting it directly to the case chassis. The key to either of these mounting choices, are the set of four rubber vibration absorbing posts. 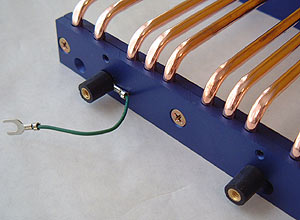 These rubber posts allow the hard drive and ZM-2HC1 to be firmly attached within the 5.25" bay, or to the base of a case, while at the same time addressing vibration and subsequent noise concerns. To maintain the proper grounding of case components, and additional jumper is included so you can ground the hard drive to the chassis as well (this allows any static which may build up by the drives platters spinning, to be grounded).

There isn't all that much to say about the Zalman ZM-2HC1 in the grand scheme of things. The heatpipes are cooled by air flow, and that creates a temperature gradient between the center of each copper tube, and the aluminum rails which attach to the side of the hard drive.

The cooling factor without airflow assistance is only a few degrees, and I don't think this makes much of difference as far as the hard drive is concerned. The vibration absorption on the other hand, can have a large impact on how noisy a case is.