The Jet4 fan draws quite a bit more current than a typical vaneaxial fan, and so power is pulled from a standard molex pass through connector instead of the motherboard fan header. A separate three-pin jack plugs into the motherboard to deliver the single RPM signal so online ran monitoring software doesn't assume your processor is seconds away from thermal destruction.

Along with the Coolermaster Jet4 heatsink comes a 3.5" aluminum bay cover, and standard steel expansion slot PCI bracket so you have your choice of where to mount the fan-speed controller. The fan-speed potentiometer has lead wires that are about 19" long, so the user can control the fan speed without cracking open the case to poke around inside. 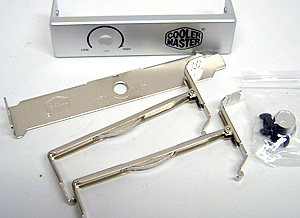 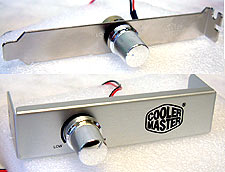 If you have an aluminum case, you'll be pleased to see that the 3.5" aluminum bracket is tastefully done, and should fit in nicely. By mounting the dial on the PCI bracket you can put the fan speed controller in a less obvious location at the rear of the PC. However, since the potentiometer is not removable from the heatsink, it has to go in either one of these locations.

Of course, the most noticeable aspect of the Coolermaster Jet4 is the jet engine like appearance it has. With a heavy dose of chrome, this baby looks pretty damn fine, although you're going to need a case window to take full advantage of its good looks. The rear of the fan even has a little embedded red LED, to give that engine look extra credence.