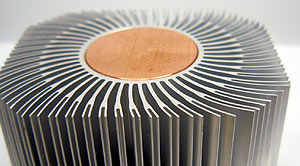 The TI-RV104N is an extruded aluminum heatsink, but there are several differences between it and what most of us are used to seeing. For starters, the main components of the heatsink are all very thin - typically no more than 2mm thick at the widest.

The copper core which measures 39mm in diameter forms the contact area of the heatsink, and through an interference joint with the surrounding aluminum transfers whatever heat it absorb's out to the many thin bifurcated (forked) aluminum fins.

The fins themselves are just 1mm thick at the base, but branch out with a slight curve to ~2mm thickness before forking into two 0.3mm thick fins. It is difficult to say how effectively the heat energy will flow out to the edges of the aluminum fins at this point, but the designers have certainly gone a long way to keeping surface area high, and problems with back pressure low.