Used with one of three included clips, the 3Dcooler-Pro attaches to an AMD AthlonXP, Athlon64, or Intel Pentium4 with little fuss. It is important to consult the manual to ensure you have the heatsink oriented properly when using the socket A clip especially. There is a small tab that comes down, and if you have the heatsink installed the wrong way, it could cause problems when you power up the PC. The heatsink and power hungry blue LEDs draw power from a standard molex pass through power cable, and not the motherboard fan header. the molex power cable is long enough that you can attach it to a drive or powersupply without worry however. 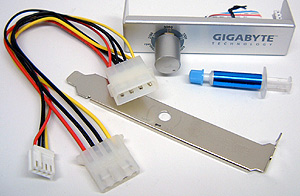 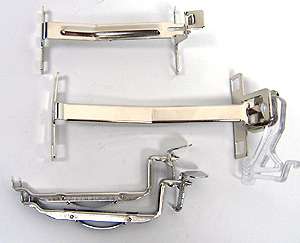 Additionally, the Gigabyte 3Dcooler-Pro heatsink comes with a fan speed adaptor which mounts to a 3.5" aluminum floppy drive bay cover or PCI bracket for quick access. The potentiometer allows the user to adjust the 3Dcooler fan speed from a quiet 1000RPM to a loud 4500RPM with ease, and plugs into the side of the heatsink with a short 18" cable. 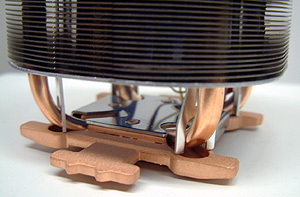 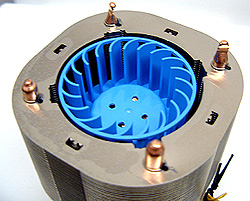 Based on thermal testing FrostyTech has conducted on the Pentium 4 and AthlonXP Synthetic temperature test platforms, the 3Dcooler-Pro offers consumers pretty respectable lower-noise cooling, and very impressive high end cooling for the P4 in particular - that is if you don't mind the vacuum cleaner like noise levels of upwards of 64 dBA (according to our real world sound measurements).