Surprise, surprise, the Evercool CUF-715 is virtually identical to the Titan CW9TB/SC that we reviewed previously. It will be interesting to see how these two heatsinks compare to one another, as the only major difference is a heathly coating of chrome on the later cooler. 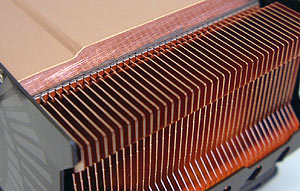 The fins may look like they have been glued in place, but rest assured that is solder. Each fin has a small fold of copper formed at the base which has been soldered directly to the 6mm thick copper base plate. This forms a good thermal interface in theory, but can be adversly affected if the solder flow was incomplete.