A series of 40-odd stacked copper fins are connected by four 6mm diameter heatpipes which terminate at in the forged copper base beneath a stainless steel retention plate. 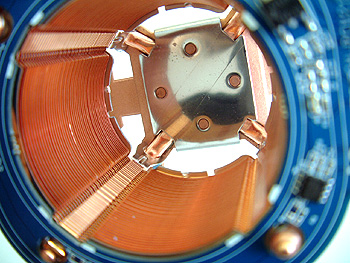 To increase air flow through the many copper fins, Gigabyte have actually adopted a very clever idea.

On the inside edge of the each copper sheet, the press exerted extra pressure to give each copper edge a slight bevel. Thus as air passes exhausts outward from the center of the Gigabyte 3Dcooler-Ultra, there is less airflow resistance, which should ultimately mean increased thermal performance in the end.

As it's name suggests, the PCU31-VH exhausts warm air outward in a 360 degree fashion from a central fan, while cool air is drawn in from the top and bottom by an integrated two-tier squirrel cage fan. The copper fins form both the body of the heatsink, and the outer casing of the fan, holding it firmly in place, in fact. On the very top of the heatsink is a small section of PCB with blue LEDs which illuminate fan's opening, giving it a sense of style which is unique to the cooling world. 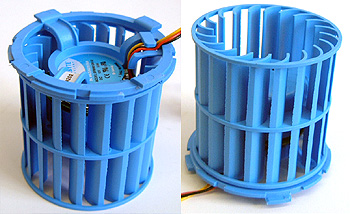 The heatsink and power hungry blue LEDs draw power from a standard molex pass through power cable, and not the motherboard fan header. The molex power cable is long enough that you can attach it to a drive or powersupply easily. 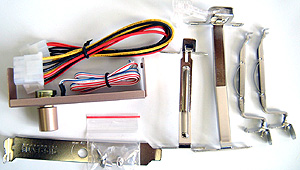 Used with one of three included clips, the 3Dcooler-Ultra attaches to an AMD AthlonXP, Athlon64, or Intel Pentium4 with little fuss. It is important to consult the manual to ensure you have the heatsink oriented properly when using the socket A clip however.

There is a small tab of metal that comes down, and if you have the heatsink installed the wrong way, it could cause problems when you power up the PC.

Additionally, the Gigabyte 3Dcooler-Ultra heatsink comes with a fan speed adaptor which mounts to a 3.5" aluminum floppy drive bay cover or PCI bracket for quick access. The potentiometer allows the user to adjust the PCU31-VH'sr fan speed from a quiet 1000RPM to a loud 4500RPM with ease, and plugs into the side of the heatsink with a short 16" cable.